The content were compiled from multiple resources on the internet (forum, papers, workshop etc.). I could not indicate all the sources, but I want to thank them for sharing experiences/knowledge/code.

ATAC-seq (Assay for Transposase-Accessible Chromatin with high-throughput sequencing) is a method for determining chromatin accessibility across the genome. It utilizes a hyperactive Tn5 transposase to insert sequencing adapters into open chromatin regions. 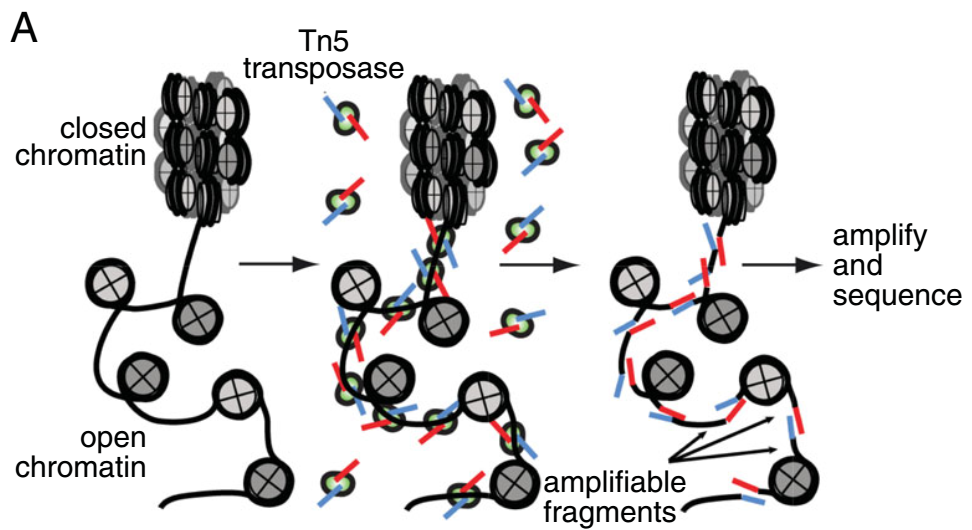 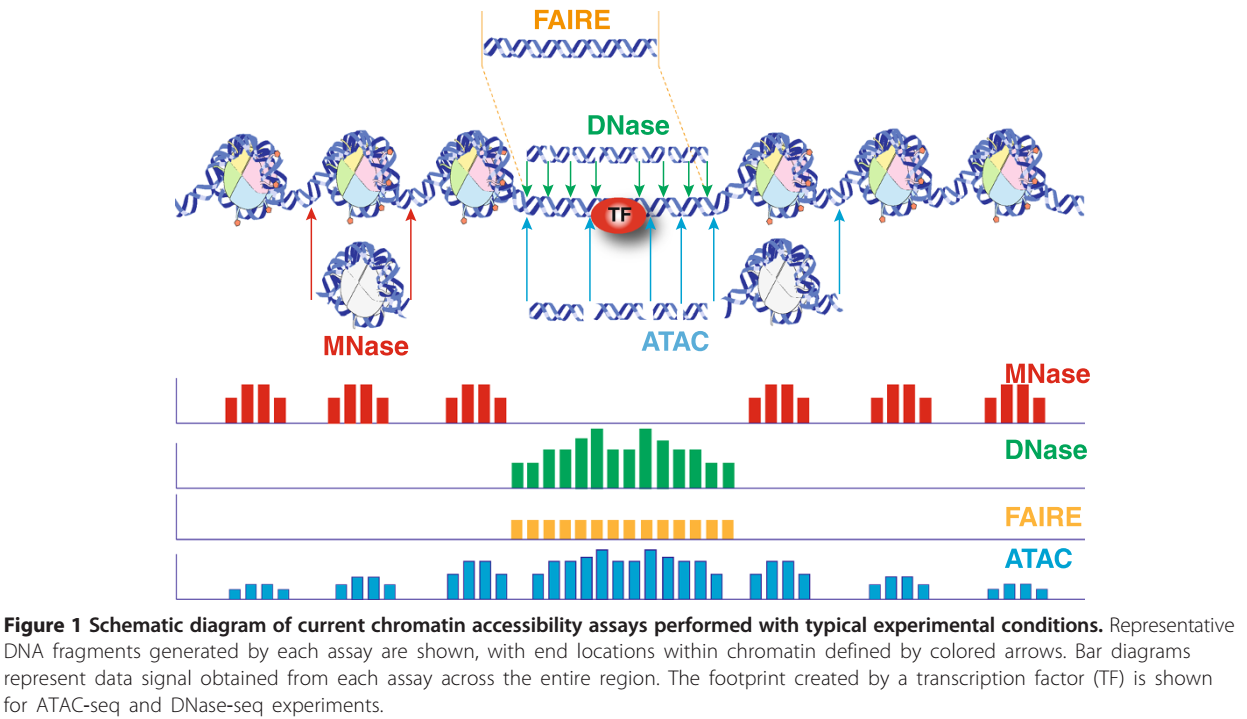 And ATAC-seq can be used to:

The following pipeline includes several common analysis in ATAC-seq setting, from data trimming to peak calling. Some steps are optional, like merging BAMs.

Just like analyzing other NGS data, quality control is needed for raw FASTQ, and there are many programs avaliable, such as Trimmomatic and Trim Galore.

The next step is to align reads to a reference genome. Two popular aligners are BWA and Bowtie2. I will use Bowtie2 (since it was used in many tutorals and papers).

Then, the alignment results should be filtered.

Since there are no ATAC-seq peaks of interest in the mitochondrial genome, these reads will only complicate the subsequent steps. Therefore, we recommend that they be removed from further analysis, via one of the following methods:

Since the percentage of mtDNA-reads is a indicator of library quality, we usually remove mitochondrial reads after alignment. It is run as follows:

PCR duplicates are exact copies of DNA fragments that arise during PCR. Since they are artifacts of the library preparation procedure, they may interfere with the biological signal of interest. Therefore, they should be removed as part of the analysis pipeline.

MarkDuplicates will add a FALG 1024 to duplicate reads, we can remove them using samtools:

Different genome aligners have varied implementation of mapping quality (MAPQ). See More madness with MAPQ scores (a.k.a. why bioinformaticians hate poor and incomplete software documentation). So, when using MAPQ to filter non-unique alignments, do check the MAPQ values of the aligner using.

In the pipeline by ENCODE or some papers, the following reads were also removed (samtoolf flag 1796 or 1804).

Considerations about “merge BAMs” or “merge peaks” have been discussed:

And merging BAM can be done using samtools.

Also, multiBamSummary in deepTools can be used to check the correlations between BAM files before merging.

However, for peak calling, shifting of reads is not likely very important, as it is a pretty minor adjustment and peaks are 100s of basepairs. The shifting is only crucial when doing things where the exact position of the insertion matters at single base resolution, e.g. TF motif footprinting.

Also, remember that not all TF footprinting tools need shifted reads. Some of them may do this internally, e.g. NucleoATAC.

But, how to adjust the reads alignment?

First, we could do this using bedtools and awk.

Or, we could do this using alignmentSieve.

We could also do this in R using ATACseqQC

You typically use the --nomodel option, as the shifting model of MACS does not really make sense for open chromation data. As you have probably paired-end data, also use the -f BAMPE option. It forces MACS to pileup the real fragment length instead of an estimate, which maked sense imho, due to the quiet different fragment sizes that the library prep creates, also if you have paired-end why not make full use of it. Check reproducibility of the peaks between replicate samples, then rerun MACS with the merged bam file and feed the count matrix into DESeq2. Reference e.g. Corces et al 2016 Nat Genetics.

Liu Tao: If you followed original protocol for ATAC-Seq, you should get Paired-End reads. If so, I would suggest you just use --format BAMPE to let MACS2 pileup the whole fragments in general. But if you want to focus on looking for where the ‘cutting sites’ are, then --nomodel --shift -100 --extsize 200 should work.

Since paired-end sequencing is commonly used in ATAC-seq, so, we will tell MACS2 that the data is paired using the -f argument. By this way, MACS2 would only analyze properly mapped reads (as we get the bam after filtering above). The fragments are defined by the paired alignment, and there is no modeling or artificial extension.

If -B parameter was used when running macs2 callpeak, you would get bedGraph files together with narrowPeak files. Someone would use these bedGraph files to create browser tracks (e.g. ParkerLab - ATAC-seq lab for BIOINF545), while others say they look kind of weird (Biostars - How to compare bigwig tracks of two ATAC libraries). I do not know yet.

I would like to create bigWig files for visualizing using bamCoverage in deepTools. It provides several different ways to normalize the signal.

In processing ATAC-seq data, we would get several metrics to check the quality of data/libraries.

Here is the standards used by ENCODE, and the detailed description of each term will be explained below. 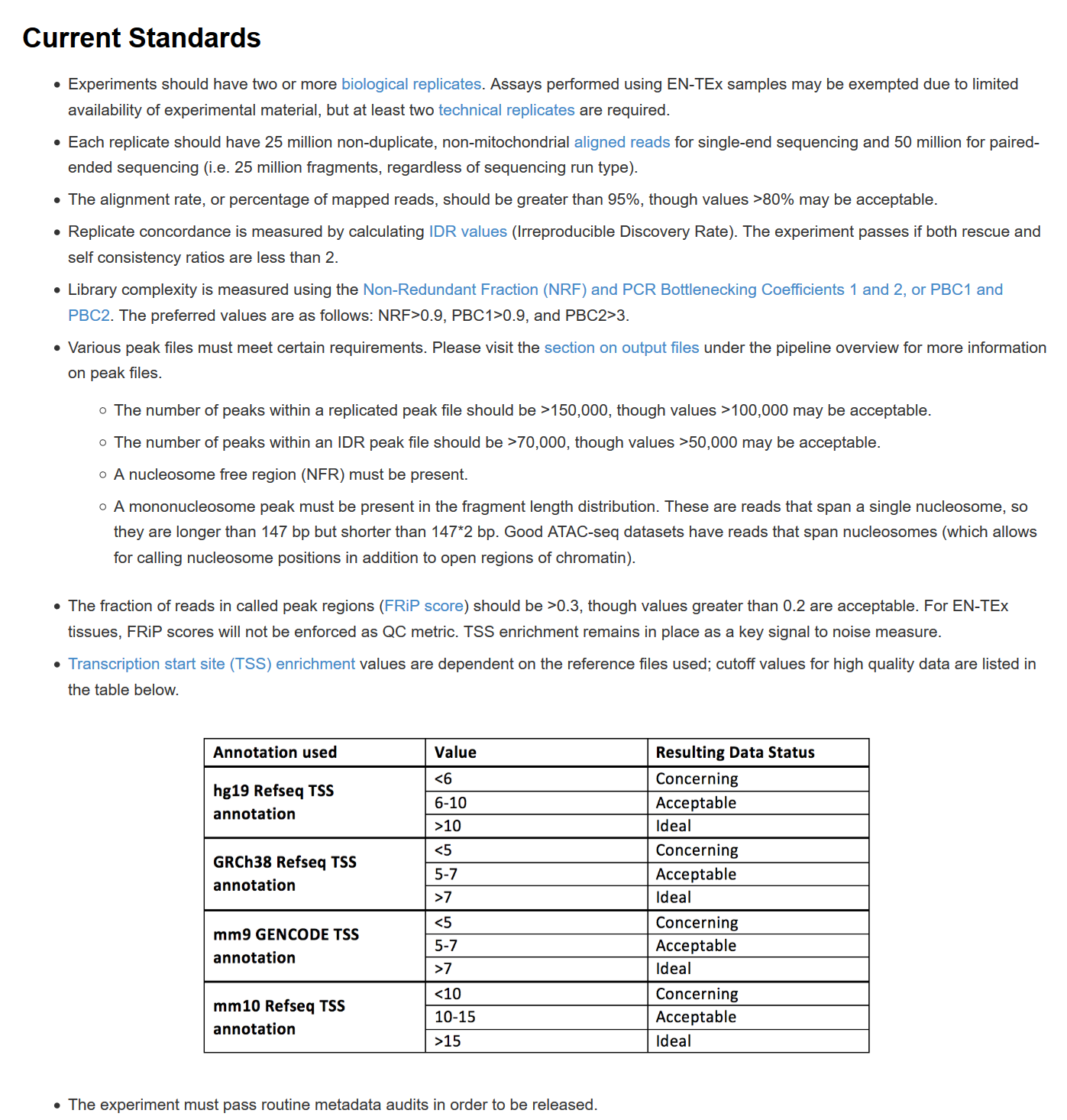 One common QC for the data is to plot the fragment size density of your libraries. The successful construction of a ATAC library requires a proper pair of Tn5 transposase cutting events at the ends of DNA. In the nucleosome-free open chromatin regions, many molecules of Tn5 can kick in and chop the DNA into small pieces; around nucleosome-occupied regions, Tn5 can only access the linker regions. Therefore, in a normal ATAC-seq library, you should expect to see a sharp peak at the <100 bp region (open chromatin), and a peak at ~200bp region (mono-nucleosome), and other larger peaks (multi-nucleosomes). Examples from one of my data: 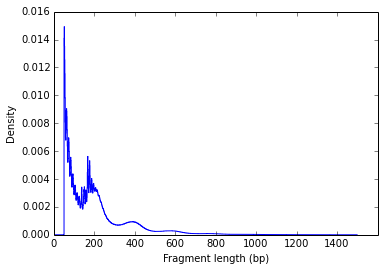 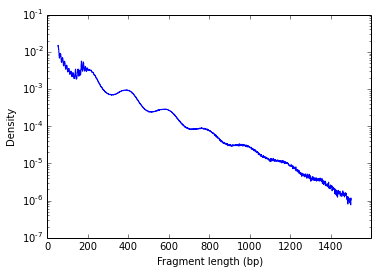 This clear nucleosome phasing pattern indicates a good quality of the experiment.

Different people probably have different way of plotting this using different codes, but making this plot can be simply achieved by a combination of one line of code and Excel. You don’t need some complicated scripts to do it at all.

High mitochondrial reads was a well-known problem, but in the latest ATAC-seq protocol (Omni-ATAC) this problem has been well addressed (Corces et al., 2017).

I guess in the future people will not care about this any more, and I keep this section in case.

It is a well-known problem that ATAC-seq datasets usually contain a large percentage of reads that is derived from mitochondrial DNA (for example, see this discussion). Some have gone as far as using CRISPR to reduce mitochondrial contamination. The recently published Omni-ATAC method uses detergents to remove mitochondria and is likely to be more accessible for most researchers (but, do not follow their computational workflow).

The following code can be used to compute the percentage of mitochondrial reads.

Library complexity is measured using the Non-Redundant Fraction (NRF) and PCR Bottlenecking Coefficients 1 and 2, or PBC1 and PBC2. The preferred values are as follows: NRF>0.9, PBC1>0.9, and PBC2>3. 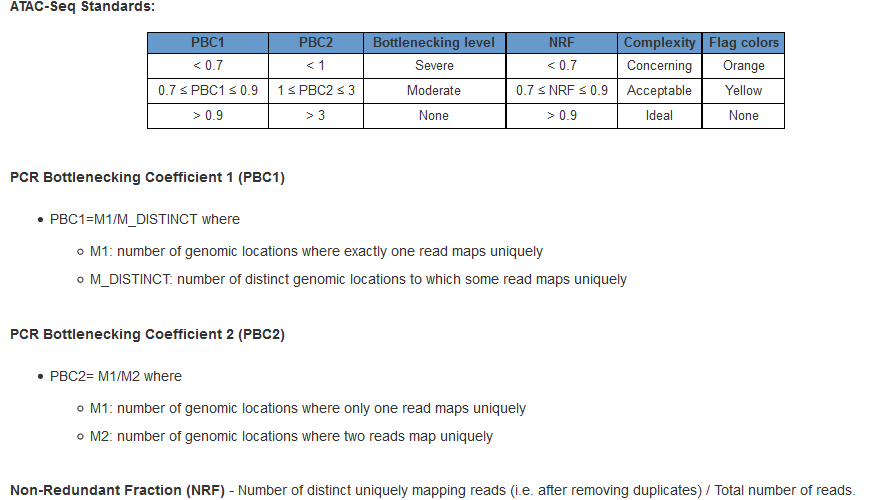 The following code was from ENCODE ATAC-seq pipeline.

Fraction of reads in peaks (FRiP)

In paired-end sequencing, we use the word fragment because the two reads that are produced always originate from the same DNA fragment and are therefore not independent of each other as reads from single-end sequencing would be. As FRiP comes from single-end ChIP-seq data, this is why they probably termed it reads. ATAC-seq is most commonly paired-end. You can use BEDtools for paired-end data but it requires more pre-processing of your data, that is why I use featureCounts, being faster and more convinient with plenty of customizable options. Choice is still yours. FRiP is probably not a very objective measure anyway, as it highly depends on how you prefilter your data, e.g. in terms of mapping quality, the definition of a properly-paired reads and the stringency of your peak calling (last sentence thinking aloud).

The fraction of reads in called peak regions (FRiP score) should be >0.3, though values greater than 0.2 are acceptable. For EN-TEx tissues (ENCODE GTEx tissue sample), FRiP scores will not be enforced as QC metric. TSS enrichment remains in place as a key signal to noise measure.

FRiP score can be calculated by samtools and bedtools:

While someone recommended to use featureCounts (https://www.biostars.org/p/337872/#337890), I found the results of featureCounts and intersectBed were close. So, I would like to use bedtools.

Transcription start site (TSS) enrichment values are dependent on the reference files used; cutoff values for high quality data are listed in the table below.

Transcription Start Site (TSS) Enrichment Score - The TSS enrichment calculation is a signal to noise calculation. The reads around a reference set of TSSs are collected to form an aggregate distribution of reads centered on the TSSs and extending to 1000 bp in either direction (for a total of 2000bp). This distribution is then normalized by taking the average read depth in the 100 bps at each of the end flanks of the distribution (for a total of 200bp of averaged data) and calculating a fold change at each position over that average read depth. This means that the flanks should start at 1, and if there is high read signal at transcription start sites (highly open regions of the genome) there should be an increase in signal up to a peak in the middle. We take the signal value at the center of the distribution after this normalization as our TSS enrichment metric. Used to evaluate ATAC-seq.

The following code was from ATAqC.

One may want to filter peaks using DAC Blacklisted Regions.

The 5th column of narroPeak file is integer score for display calculated as int(-10*log10qvalue). Since currently this value might be out of the [0-1000] range defined in UCSC Encode narrowPeak format, the awk code is to assign values greater than 1000 to 1000.

One may want to merge peaks from different libraries or different samples.

Corces et al., 2016 used the following method to merge peaks, and I like their way:

To generate a non-redundant list of hematopoiesis- and cancer-related peaks, we first extended summits to 500-bp windows (±250 bp). We then ranked the 500-bp peaks by summit significance value (defined by MACS2) and chose a list of non-overlapping, maximally significant peaks.

We can do this by using BEDOPS (ref: Collapsing multiple BED files into a master list by signal)

Well, then we complete the main upstream ATAC-seq data analysis. For downstream analysis, one may want to annotate peaks, find enriched motifs of TFs, compare peaks under different conditions and combine ATAC-seq data with other data types like RNA-seq etc. 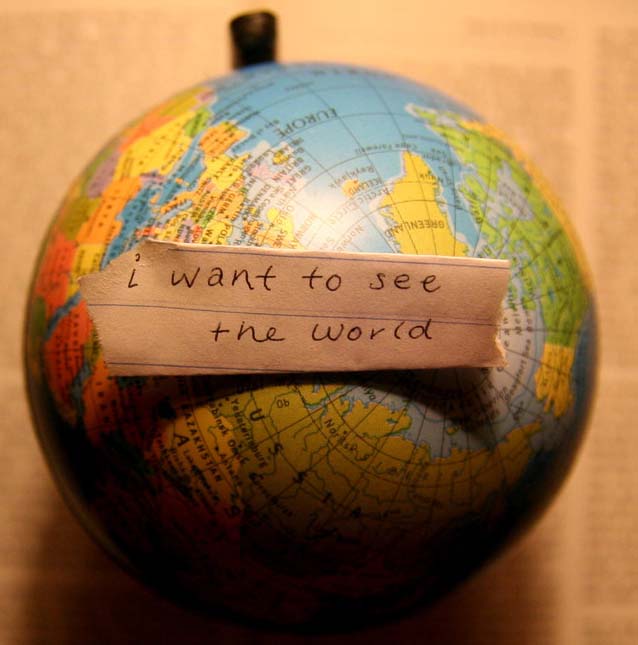 a beginner, a learner